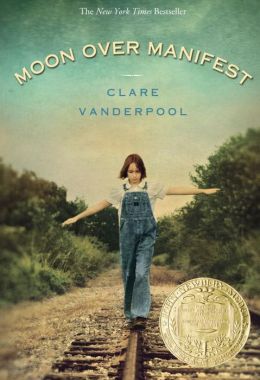 Moon Over Manifest
by Clare Vanderpool

I have embarked on a new writing project.  Though it is a little formless now, I do know that it will be set during The Depression or a time like The Depression.  So, I've been excavating my memories, trying to mine anything I already know about the time period.  What I have found to date are the big stories:  bread lines, CCCP, and Dust Bowl.  Until I watched the new Ken Burns documentary, I didn't have any personal information about the time period.  My grandparents were teenagers at the time, but their stories just seemed to romanticize it as "a simpler time."

And then, I remembered Clare Vanderpool's novel Moon over Manifest.  It tells the story of Abilene Tucker, a twelve year old girl who is sent to live with friends so that her father can take a railroad job in 1936.  (I have come to find out that parents would do anything to secure employment during the '30s, and sending children away to live with family and friends was common.  You can also read about this in Turtle in Paradise  by Jennifer L. Holm.)  Until now, Abilene has lived life on the move and is only acquainted with the town of Manifest by way of her father's stories.  She imagines it to be a wonderland of sorts.

As she jumps off of the train in this small Kansas town, she reads the welcome sign:  Manifest—A Town with a rich past and a bright future.  What she finds when she arrives to her caretakers home doesn't match up to her expectations.  After meeting one character after another, she settles into a group of friends.  With them, she finds a stack of letters written during World War I.  In an attempt to track down the object of the letters, the girls set out on a spy hunt.  Mysterious warnings repetitively emerge, but the girls are undaunted and continue their search to the end.

Vanderpool effectively weaves historical fact into this very personal story of innocence and redemption.  It is a wonderful read for anyone capable, starting in about 4th grade.  If you can convince your reader to wait until they are twelve, they might understand the true meaning of the story better.