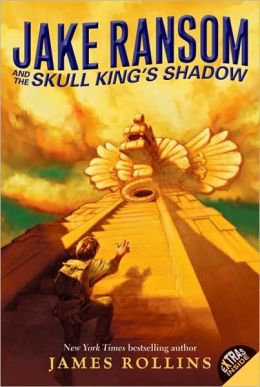 Jake Ransom and the Skull King's Shadow
by James Rollins

I was flipping through a back issue of School Library Journal when I found this review:

“Gr 5–9—Eighth-grader Jake and his older sister Kady are invited to the British Museum to view the Mayan treasures their archaeologist parents discovered shortly before their disappearance three years earlier. Jake takes along what is left of their parents' possessions: a field log, a sketch book, and two halves of a gold Mayan coin (worn by the siblings around their necks). At the exhibit, Jake examines a two-foot-tall solid gold pyramid with a round hole in its side. He places the Mayan coin in the slot, which creates an explosion, transporting the siblings to another place and time. Calypsos is a land inhabited by dinosaurs, mythical and fantastical creatures, and people from long-lost civilizations.

Upon their arrival, Jake and Kady befriend two teens, Pindor and Marika. Together they must save Calypsos from the banished Skull King who threatens to return and take over the land. The pace of the story is occasionally a little slow, but readers who stick with it will be caught up in the adventure, particularly those who are interested in Mayan culture. The characters are likable, especially Jake and Pindor, who experience the insecurities of most teens. Simple drawings add visual aid to the descriptions of Mayan glyphs and other objects. Unanswered questions surrounding their parents' disappearance and the connection between Jake and the Skull King will have readers eagerly looking for the next installment in the series.—Kelley Siegrist, Farmington Community Library, MI”

Now, lately I have been having a lot of requests for books for a child who loves books by Rick Riordan, so the review jumped out at me.  I have to admit, I am not sure why I didn't notice it the first time through.  I was intrigued by the hero, Jake Ransom, a cross between Carter Kane and Indiana Jones, so I gave it a try.


I liked the book, but wish we could find a way to liberate children without disposing of their parents. Are we really that bad?

It was a fun read and I am recommending it to my son for a break from his required reading at school.  I find that as the books on his required reading list get harder, I need to help him find the books that simply entertain.  For my 7th grader, Mr. Rollins’ new series fits the bill.  If he likes the first book as much as I suspect, I will check out the next in the series, Jake Ransom and the Howling Sphinx.
Posted by Melissa at 6:38 AM 5 comments:

Book Club is BACK!

What a stack of books?  These are the book club kids choices for the month of October.  I have read some of them.  Two of the books are new to me: Dork Diaries #3 and Wonder.  I will tackle them first and then begin rereading the other titles.  I have to say book club takes a bit of time, but it is worth it once I am back with the kids.

I have been hosting these clubs for four years now.  In the process, a few lessons have been learned.  I thought I would share them with you today, in case you are thinking of hosting one yourself.

Tip #1- Keep the group to under 10.
I must say I think 7 or 8 is the perfect size.  If you have just an hour and everyone has read the book, this gives everyone time to speak their mind.  Besides, with a smaller group you can all fit around a table.

Tip #2-Let the kids pick the book.
I have tried every possible arrangement and finally seem to have found the best way to choose a book for my students.  First, I organize the students according to interests.  For years, it was just by class or grade, but we could never settle on a title.  Second, I bring a few books along, within the group's preferred genre, to prime the pump.  They rarely choose my title, but they always get the conversation started.

Tip #3- Bring Snacks-
I did not bring food along last week.  It was missed.  I don't know why, but when you are sharing a book, somehow food makes it better.

Tip #4- Don't be afraid to tackle difficult books
Topics are only too scary, too sexy, too real or too adult if we refuse to talk with the kids about them. Now,  I am not suggesting letting a young child take on an overly complicated or disturbing book. But, when they are ready, or if they are going to read it in spite of you, take on the challenge and help your readers navigate the themes.  I promise they will impress you!

If you host a book club, please share any gems you have learned along the way.  If this inspires you to get started, let me know how it is going. 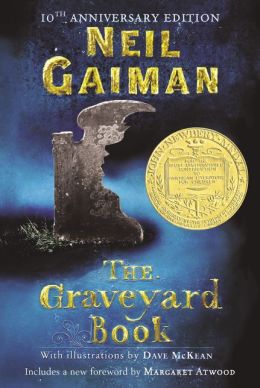 The Graveyard Book
by Neil Gaiman

Book clubs are up and running once again. The first group to assemble were the fifth graders at 8:00 am.  I have to tell you that the hour made this a difficult meeting for me.  If you combine that with the fact that many of the members were new to the group this year, I worried that we might not ever get things rolling.

The book I chose for the group was a bust.  By 8:05, we had established that the book was uninteresting and too long. What to do for the remaining 50 minutes?  We talked about some of our favorite summer reading.  This brought us to 8:15.  I was certain that Jerusalem, the keeper of our book room, had stopped the clocks. Staring out into the group, I made one last attempt at engaging them.  I had brought along a bag of books as suggestions for next month's reading.  After showing them to my readers, I encouraged them to browse the book room shelves for the books they found appealing.  We collected 10 books.  They turned out to be magic books.

As the students sorted through the titles, they started talking with each other.  They read the book descriptions.  They evaluated titles and cover art.  They pondered what the awards some of them had received might be for.  Finally, they put the books into 3 categories:  Mystery, Horror, Realistic Fiction.

I asked how they planned to narrow down the choices. After all, they only needed to read one book.  Just like in House Hunter, they started by eliminating one genre, realistic fiction.  Then, after much discussion, they reluctantly put the mysteries aside, deciding on horror for October.  A pretty apt choice, I must say.  I haven't read the book they selected yet, so I will report on that before Halloween. I do, however, have a favorite horror book myself, The Graveyard Book by Neil Gaiman.

The first few pages are heart wrenching.  I hate to give away the drama, but I will tell you that it results in a baby finding a new home in a graveyard.  In the world of Gaiman's creation, the ghost of a person continues living in the graveyard in which they are buried.  The baby, BOD, is raised by the ghosts of this graveyard and the other sorts of creatures that inhabit it like werewolves and vampires.  Life is good for Bod as long as he stays in the graveyard.  But, as he ventures out, the events that forced him to his new home conspire to find him.

If you are not taken with this plot line, check out the post "Mystery Anyone?"  You will find some other suggestions there.