A Blaze of Glory

With A Blaze of Glory, Jeff Shaara returns to the Civil War with a vibrant re-creation of one of the war's bloodiest engagements-the Battle of Shiloh.  It is the first in what is said to be "a trilogy of lesser known battles of the Civil War."  If you have an American history fan at home, this newly published book is a must. 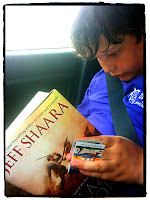 My son picked it up for our trip to the beach and devoured it.  Like Shaara's other novels, A Blaze of Glory dramatizes the events of the battle through the voices and thoughts of the Officers, senior and junior alike, conscripts and enlisted men on both sides of the conflict.

Here's how the book begins:

“Keep those men out of there! They will not pass!”

Seeley’s words were harsh, loud, the men around him doing all they could to obey. The shotguns hung by each man’s side, and the lieutenant felt a shaking nervousness, was not ready to give the order that would point the long guns at these civilians. Like him, most of these troopers had never fired their weapons at anything but crude targets. Now the targets were men, surging toward him through the darkness, pushing their way toward the gaping doorways of the supply depot, a massive warehouse close to the river. Seeley had positioned his six horsemen in an even line, to block the way of the crowd, but the crowd was a mob, desperate and mindless, their goal the precious food and bundles of supplies that lay in the warehouse. A few cavalry meant nothing at all, and quickly the mob pushed into them, some slipping past, between the horses. He felt his own frustration rising, could feel the tinder­box explosiveness of the mob, and he shouted out again, could not help the higher pitch, his voice betraying the fear.
Posted by Melissa at 5:08 PM